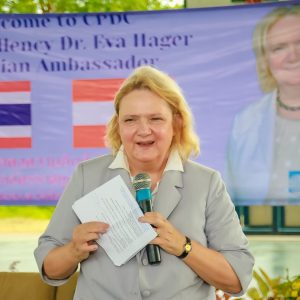 On the occasion of the 10th anniversary of the Human Help Network Foundation Thailand I would like to present my sincere congratulations and best wishes to the organization, its founders and leaders, the affiliated social workers and volunteers, and the many beneficiaries over the years: originally unfortunate children, who found a caring and stable home, relief from their distress, and perspectives for a brighter future. In its child protection and development centre, the foundation has constantly helped children in need, who formerly suffered tremendously, living in the streets, under risky, violent and unhealthy conditions and exposed to a variety of ugly abuses. They found an affectionate family and caring environment, resumed normal education in schools in the neighborhood, and were helped to cope with their post-traumatic stress. The Foundation also supports the Pattaya orphanage which is a loving home for children whose parents passed away or are unable to raise them. Furthermore, the foundation’s support extends to the Sotpattana School for the Deaf, which was founded in 1983, and which has helped since its beginning hundreds of deaf or hearing impaired students to graduate from standard school curricula.

The Austrian Embassy, a number of individual members of the Embassy, and the Austrian Honorary Consul in Pattaya have on various occasions lent their support to the foundation and its partner institutions through fund-raising and private donations,

Nevertheless, child-trafficking and child abuse are still a rampant phenomenon on a worldwide scale. In Austria, in 2007 a Working Group on Child Trafficking has been established to co-ordinate the authorities’ efforts in combating this vile trade in human beings. In 2016, the Working Group developed a National Referral Mechanism on identifying and helping potential victims of child trafficking, including pertinent guidelines. The mechanism coordinates the work of public authorities, especially public prosecutors and the child and welfare authorities, as well as NGOs. Besides providing access of the victims to the necessary help, a main objective of the mechanism is also to lay the foundation for effective prosecution of the perpetrators. The mechanism has been broadly distributed and the child and youth welfare services as well as the police use it in their training. Thus, the combating of child-trafficking in Austria has been greatly professionalized over the years.

Likewise, the Human Help Network Foundation Thailand is doing a highly professional service to child victims and children in distress.

I would like to encourage the foundation to perseverate in its valuable endeavors to bring joy and happiness to children and raise awareness about their rights.

May many more happy initiatives and actions of the foundation spread and prosper with the help of national and international partners.

With my best wishes,